Editor, Karen Robbins
Q A family bought babies from one of our breeders to be companions to their single older male rat (his companion had died). They brought the older male over to her house when they went to pick out the new companions and she noticed the staining around the eye. I was asked about it as she had never had this before and was 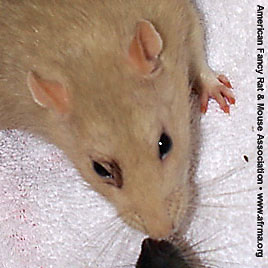 wondering if it was common. The owners had this happen once before on a rat they had 4 years prior. At the time, the vet said it was porphyrin and in the information they had, said it could be caused by stress, poor diet, pain, or illness. What I had told them was “Porphyrin staining is just the term for the red tears that rats produce. It is an indication that there is something wrong with the eye(s)—either stress, infection, illness, or injury. As long as your rats are fed properly, not overcrowded, sick, etc., then you will not see it in your rats so is not that common. Since this rat only has it in one eye, that usually means something wrong just with that eye such as injury or infection. A vet should be able to look at the eye to determine if it is an injury to the eye or some type of infection. This web site explains porphyrin in rats www.ratbehavior.org/porphyrin.htm.”

They took the rat to the vet and the vet told them their rat had rodent mites and a skin condition. The coloring around his eye was blood from scratching himself, not porphyrin (he had little scratches and sores near his eye and elsewhere). The vet told them to dip him and the new babies (since they had been together a couple days) in a lyme bath 3x per week (lime sulfur diluted 1:40 in water). The Internet references he gave on the lyme (www.vspn.org/vspnsearch/aow/drugtherapyinpetrodents.htm) said it is for sarcoptes mites in guinea pigs, rats, and hamsters, and fur mites in mice and rats. Another person had recommended Revolution to treat the mites.

A I have seen the tropical rat mite and they are big enough to see in the fur with the naked eye. They also attach to people so the humans should be itching as well. In the presence of Ornithonyssus bacoti (tropical rat mite), you have to treat the environment as well. It is very difficult to eliminate. If the vet needed to use a microscope to see the parasite, than it is unlikely to be the tropical rat mite. Rats, just like people, can have nonpathogenic mites. However, it would be nice to know exactly what he saw. If the breeder’s rats have mites, I would suggest not setting up any breeders for a month and once all the pups are weaned, treat the entire colony with the two or three doses. You break the life cycle and no more mites. The mites can come in on the food and bedding. The current standard of veterinary care for laboratory rodents is to use ivermectin, not dips, at this point in time. Recent papers on Revolution has shown it not to be effective for some parasites in mice.

Elimination of an Infestation of Rat Fur Mites (Radfordia ensifera) from a Colony of Long Evans Rats, Using the Micro-dot Technique for Topical Administration of 1% Ivermectin.

Kondo S, Taylor A, Chun S., University of Hawaii, Laboratory Animal Service, 2538 The Mall, Snyder Hall 501A, Honolulu, HI 96822.
“Micro-dot delivery of 1% ivermectin was used in an effort to eliminate an infestation of rat fur mites (Radfordia ensifera) from a conventionally housed colony of Long Evans rats. The colony was used for breeding as well as for behavioral testing. A micropipette was used to apply a 1% solution of ivermectin (2 mg/kg of body weight) to the skin on the dorsal aspect of the shoulder. Three treatments were applied at approximately 2-week intervals. All rats in the colony were treated. However, to avoid toxicity to neonates, nursing females and their pups (control group) received mineral oil in lieu of ivermectin until after weaning, at which time they also were treated with ivermectin. During the treatment phase, skin scrapings were used to detect mites. Control rats remained positive for fur mites when treated with mineral oil. After 3 applications of ivermectin, all rats were found to be free of mites. During the posttreatment phase, skin scrapings, dorsal tape tests, and a washing method were performed on euthanatized rats to detect mites. Rats tested up to 129 days (18 weeks) after ivermectin treatment were still free of mites. In a breeding colony composed of rats of various sizes and ages, micropipette delivery of ivermectin allowed for accurate dosing to eliminate fur mites, while preventing inadvertent toxicosis. We did not detect obvious adverse effects on the breeding program or on the behavioral studies in which these rats were subsequently used, nor did we detect morbidity or mortality associated with ivermectin administration.”