In reviewing articles as part of my study plan for taking the veterinary pathology board examination in September 1998, I came across an article on ivermectin treatment in mice and another on mouse milk constituents that I thought would be useful to AFRMA members.

Milk constituents in the Mouse (in percentages) 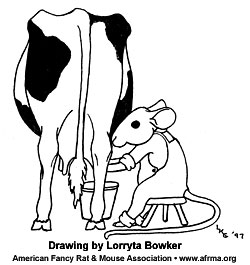 Article: “Ivermectin Toxicity in Young Mice” by B. Skopets et al, in the Notes section of the Journal Laboratory Animal Science 1996 Vol. 46:1 pages 111–112.

The relevant information is summarized below:

The antiparasitic action of ivermectin is through stimulation of the release of gamma-aminobutyric acid (GABA) in GABA-ergic neurons. Enhanced release of GABA blocks the neurotransmitter, acetylcholine in nematodes (round worms) and arthropods (eight legged insects). In mammals GABA-ergic neurons are only found in the central nervous system (brain) and ivermectin does not readily cross the blood-brain barrier.

Ivermectin preparations are frequently used for the treatment of murine (mouse) mites or pinworms.

In this study, the treatment schedule consisted of four applications of ivermectin. Treatments 1 & 2 and 3 & 4 were separated by a 9-day interval. There was a 15-day interval between treatments 2 & 3.

Ivomec (1% ivermectin from Merck & C0.) at a 1:10 dilution (0.8 ml [0.8 mg] in 16 oz of tap water) was applied as a fine mist to each cage of animals (dose of 0.9–0.11 mg per cage) for the first treatment. Treatments 2, 3, & 4 were applied with three squirts per cage of a 1:100 dilution of Ivomec in tap water. Animals were treated in or transferred into clean cages. Inadvertently during the first treatment, at least two or three squirts of the 1:10 dilution of ivermectin solution (dose of 1.6–2.4 mg per cage) were given. Litters of baby mice were not removed from their mothers during treatment.

Within 2 days after the first treatment, young mice from three litters ranging from 8-day-old pups to 21-day-old pups developed whole body seizures, or tremors of variable severity which could be precipitated or exacerbated by loud noise or handling of the animals. A total of 16 young mice were affected of the 2,100 mice treated for skin mites. Two animals died and two were euthanized. All of the others recovered spontaneously.

Skin scrapings were negative for adult, larval forms, or mite eggs on 25 randomly selected mice at 30 and 40 days after the last treatment.

The authors concluded that ivermectin at the 1:10 dilution at a dose of 2.4 ml (2.4 mg ivermectin) per cage as a spray appeared to be safe for adult animals but could cause signs of neuralgic dysfunction and mortality in young mice if applied to lactating mothers with litters up to 3 weeks of age. Application of a 1:100 dilution of ivermectin once or several times at 9 to 15 day intervals at a dose of 2.4 ml (0.24 mg of ivermectin) per cage as a spray is a safe and efficient means of controlling mites in mice.