This story is from the WSSF 2005 AFRMA Rat & Mouse Tales news-magazine.

Twas the night before Christmas and all through the house . . . was something stirring? Could it be a mouse?

Tired from decorating the beautiful fresh Christmas tree, Marylynn plopped into the luxury of the new recliner, closed her eyes . . . “just for a minute” . . . and dozed off immediately. 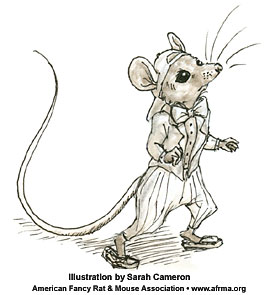 In Spring, Summer, or Fall his colorful outfits would change to blend in with the meadow”s colors. But this was a snowy winter, and he was on his way to visit his Church Mouse cousin. Milton wanted to make a good impression as he had never visited a church before or his cousin.

Marylynn dreamt Milton the mouse was standing on his back legs, walking just like a person and jumping up, from stair step to stair step until he was out of sight upstairs. Poor Milton had lost his way. This was not a church!

Marylynn was slightly aware that Benny her beagle hound had scampered, with doggie toenails clicking and sliding in his haste across the slippery floor, arriving up stairs just as Milton the mouse ducked under the bed to hide.

Oh my, it certainly was funny under this bed—dusty! Milton could hardly breathe, but there was a slit in the underside of the covered box-spring. Up the bedstead leg and into that slit went Milton the Mouse. Wow—sure was darker in here, but at least that panting dog could not see him. Smell maybe. Milton wished he could escape back to the meadows and get out of his silly clothes.

Milton had dressed just to visit and impress Cousin Chuck the Church Mouse. But this—what a predicament! This was certainly not a church, nor Cousin Church Mouse to greet him. Oh, to just get back to the meadow. That dog, now barking and jumping all over the bed. The bed was too low for the dog to go under, but the mouse scent certainly was under this bed. The springs squeaked as the dog continuously jumped to floor and back again. Soon, most of the covers were half on the floor.

Marylynn hurried up the stairs to see what Benny”s loud barking was about and was shocked at the sight of the disheveled bedcovers.

Benny! What are you doing? Then she led the unwilling dog to put him out in the fenced-in yard; came back upstairs to remake the bed, musing unintelligible sounds all the while.

Poor Milton the Mouse, just shivered with fear in his hiding place in the box spring. (Milton thought of the time he ventured into the goat barn where cats with their big yellow eyes lived. Well, he was not dressed in these silly clothes and had made a hasty retreat before any of the cats had smelled or spotted him.)

His beautiful white clothing was catching on everything; it was so crowded with all those springs. Now he was determined to get rid of the cumbersome clothes, then flee back to his comfy meadow.

Darkness came to the house where Milton the Mouse was hiding. All was quiet!

Leaving all his clothing in a heap on the floor, he, oh so carefully, slunk down the stairs, peeked around the comer, snuck into the kitchen to hide there to catch his breath while shaking with fear of that dog sleeping in the living room. Milton snuck to the drafty gap under the door, to the screen door whence he had entered the house. The hole in the bottom corner of the screen had been small, but Milton had entered through it, his fat little body enlarging the hole somewhat with the stretched wires pointing inward; Milton would have to push against them to get back out . . . . This was going to hurt! But how else to get out? Sharp wires poked his tender skin as he squeezed out that hole. Bleeding in places, he was outside of that horrible house.

He sought the tunnels in the meadow grass to find his home and his bedroom. After licking his wounds, he went directly to bed without speaking to other mice.

Next morning Marylynn was perplexed when she picked up the tiny white garments lying in a heap beside the bedstead leg. She noticed a small tear in the tiny trousers.

Marylynn was puzzled. That dream of a clothed mouse walking on two hind legs, then hopping up the stairs was confusing, even impossible! But what were these tiny garments? Anything was possible with the magic of Christmas. If Santa could come down the chimney and reindeer could fly? Well?

Benny the Beagle dog sniffed at the mouse odor on the tiny clothes and promptly went into a barking frenzy . . . .