By Virginia Pochmann, with help from a professional mouse geneticist

From Mouse Review, Issue No. 18 (April 1990). Permission given to reprint article.

I recently heard of a mouse fancier who was frustrated by his failure to create the variety called Argente Creme. He had read that this mouse was a pink-eyed chinchilla (cch/cch p/p), and he set out to introduce pink-eyed dilution (p) into his Chinchilla stock. He reasoned that he could do this by using an Argente (A/at p/p) to supply the p gene, since his Argente and Chin are both A/at at the Agouti site, and the main variables would be at the two sites in question (chinchilla vs. full colour, and pink-eye vs. black-eye). He expected the usual rate of segregation of these two recessive genes which would give him one pink-eyed chinchilla (Argente Creme) in every 16 babies in the F2 generation. After many months of crossing Argentes and Chinchillas and F2-ing their offspring (brother to sister), he still had not produced a single Argente Creme (though both A/A and at/at were segregating normally, giving him both Agoutis and Tans.) He couldn’t understand why, because he didn’t know about the phenomenon known as ‘linkage,’ which was preventing him from achieving the desired results.

Linkage refers to the fact that two genes which occur on the SAME chromosome tend to be inherited TOGETHER. That is, they are linked by existing on the same thread of DNA within the germ cell which we call a chromosome, and therefore do not segregate independently of each other.

Our little mouse (Mus musculus) has 20 chromosomes in all, and as most of us know, these occur in pairs within the fertilized egg. One member of each pair comes from the sperm and one member from the egg . . . thus, one from each parent.

Let us now consider the example mentioned above involving the genes for pink-eye (p) and chinchilla (cch). Pink-eye (p) occurs at the ‘P locus’ (locus means ‘place’) and cch occurs at the C locus. BOTH OF THESE LOCI (P and C) OCCUR ON THE SAME CHROMOSOME (No. 7), AND THUS ARE ‘LINKED’ TO EACH OTHER. This means that an allele that is present at the P locus on Chromosome 7 [either p (pink-eye) or P (black-eye)] will be inherited right along with an allele that is present at the C locus on that same chromosome (any of the following: C (full colour), ce (extreme dilution), cch (chinchilla), ch (himalayan), or c (albino).

Now consider what the above-mentioned fancier was trying to do. He mated Argente to Chinchilla, so all the chromosomes (No. 7) from the Argente carried C and p . . . and from the Chin, all the No. 7 chromosomes carried cch and P. Thus, in the first generation from this cross, as he expected, 75% were Agouti (A/A or A/at C/cch P/p). (These are the Fl generation, and are heterozygous at both C and P loci.) The Black Tans (25%) were culled.

Next, he mated them to each other, and expected to get one in sixteen with the cch/cch p/p genotype . . . as you would expect when trying to combine two sets of recessive genes. However, because of ‘linkage,’ the p gene was tied to the C gene (pink-eye to full color) so every pink-eyed mouse that showed up in the F2 generation was an Argente (A/A or A/at C/C p/p) or a Lilac Tan (at/at CC pp). Linkage thus interferes with the independent segregation of recessive genes.

To put this another way . . . it is very difficult to recombine linked genes. The only way it can happen is through ‘crossovers’ between pairs of chromosomes. In a crossover, a simple breakage occurs along the strands of DNA and each member of the pair becomes attached to the broken end of the other strand. (See diagram.) The odds against a crossover happening where you want it to happen, are of course astronomical. You can’t plan on it, but you can calculate the odds of it happening between any two linked genes, if you know the distance between the two loci involved on that chromosome. Breaks may occur at any point along the chromosome, so the further apart the two loci are on the strand the greater chance you have of getting a break and crossover occurring in-between them. 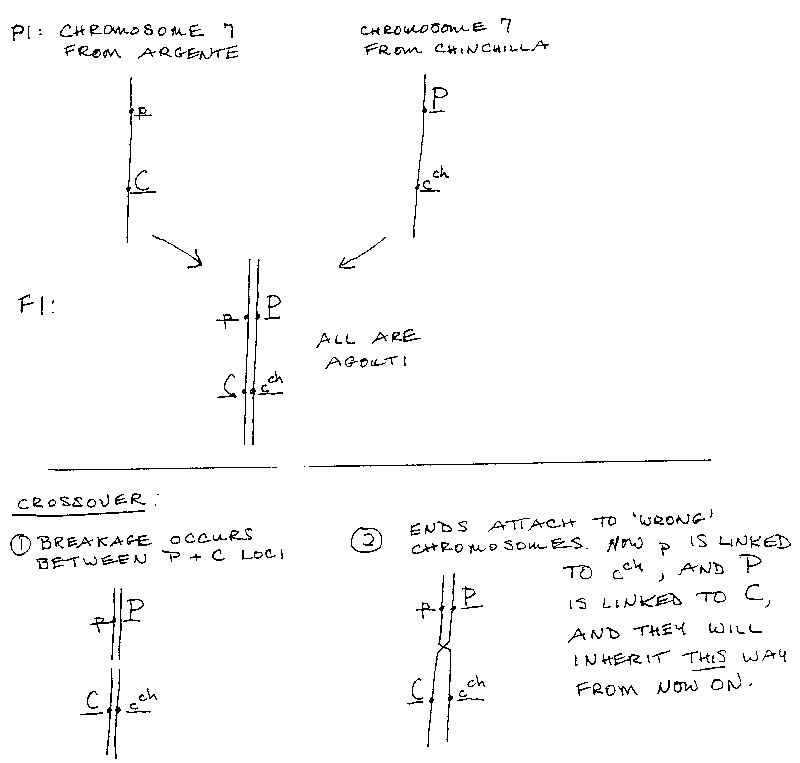 As it happens, the P and C loci are 14 cM (centimorgans) apart on Chromosome 7, which gives a probability of getting one recombination of the cch p type of 0.07 in 100 mice. A mouse having only one recombinant chromosome would still look like an Agouti, of course. You need two chromosomes of that type in the same mouse to produce the new colour.

This probably happened by sheer luck in England when the variety was developed there, and the smart fancier who discovered it, perpetuated it, and the Argente Creme was born. But you can see how dismal are the odds of being able to produce it from scratch, on purpose.

To get the white belly of the Argente Creme you must also retain the at gene (for tan) This tan is bleached out to white by the homozygous chinchilla genes (cch cch).

The following list of mutant genes will show on which chromosome each is located, and from this it will be obvious that ‘linkage’ is rarely a problem for fanciers except at the P and C locus on Chromosome 7. ‘Frizzy’ is also linked to these loci on 7.


There are, of course, other mutant genes which affect the colors shown in the Mouse Fancy, many of which are minor modifiers, such as the ‘k’ genes which influence the amount and arrangement of colored spots on Broken mice. And if we were to include all the color mutant genes known to science to exist in the mouse, we would need many pages just to list them.

Incidentally, those of you who are breeding Roan mice (developed by Jack Ball) may be interested to know that the gene is currently being mapped out at the National Cancer Institute (using mice that I sent them in 1988) and they will soon know on which chromosome it is located.

I have recently had an interesting example of linkage show up in my own colony. The Banded (Wsh) mouse which I brought back from England in September threw an oddly-colored individual in her first litter. It was a ‘poor Black’ on the top and had a light grey belly which was not clear-cut from the top color, such as a Tan has, but rather shaded upwards onto the sides of the mouse, in the manner of a Sable’s shading. I wrote to Dave Bumford (who had given me the Wsh gene) and described this mouse to him. He wrote back that the original Wsh stock came from laboratory stock which was A/A Wsh/- go/go bf/bf (that is, Agouti, Sash, longhair, and ‘buff.’) He said he thought the longhair and buff had been bred out long ago, but that recessives have a way of showing up again after you think they are gone. I went to my chromosome maps and discovered that buff (bf) is found on chromosome 5 and is therefore linked to Wsh . . . which would make it very difficult indeed to get rid of! Dave wrote that ‘buff’ (bf/bf) didn’t look like much on a non-agouti (a/a) mouse, but on an Agouti background it looks like a ‘creamy chinchilla.’ So I decided I wanted to see this homozygote for myself on an Agouti background.

First step was to mate this poor-black doe to a Cinnamon buck (not having an Agouti buck) and got two Agoutis in that litter, male and female, fortunately.

Second step was to breed those two Agoutis to each other and their first litter is now 10 days old. They had only three babies in this litter, but one of them is indeed bf/bf though on a non-agouti background . . . making it actually khaki-colored. I plan to put this little buck back to his mother when old enough, and in the next generation I should get some Agouti buffs. Doubt that it will be anything to exhibit at shows, but I just want to see one. The khaki-colored one (a/a,bf/bf) is not a particularly attractive color but is certainly different from anything I’ve seen before in mice. Rather like a dun or ‘buckskin’ horse. On Agouti (ticked) fur, it could be quite attractive.