This article is from the Summer II 1997 AFRMA Rat & Mouse Tales news-magazine.

Almost a year ago, I obtained (not by choice) a new roommate: a house mouse! Like the typical 45 year old woman, I was NOT pleased. I’d heard the horror stories about bubonic plague and the Hanta virus and everything else. A pen pal of mine (who is incarcerated) made a pet out of a mouse who frequently visited him. My convict pen pal persuaded me to do the same. Embarrassing as it is to admit, I took his advice and now have a houseful of happy, well-adjusted “ratties” as I call them (they’re MICE, not rats).

They eat out of three “dishes” placed about four feet from my typewriter. I feed them approximately at the same time every day after work. They love oats, peanut butter, oyster crackers, fried potatoes with lots of grease, and cottage cheese.

I did discover, thanks to the wonderful informative articles AFRMA sent me, that I had been feeding a little more “junk food” than I should. Not a lot, but about twice a week some chocolate candy or white cake. After reading the articles I now feed them only steel-cut oats from the health store (which they love), 100% natural peanut butter (which they DEARLY love!), and whole wheat bread (they adore it).

Though they won’t eat the pellets from the pet store for mice and rats, I try to sneak in some greens mixed in with cottage cheese. I also discovered that when I picked and washed some dandelion greens for my mice, they ate every bit of them. I was just so excited because I know dandelions have an excellent nutrient content.

The mice are all very active and their coats are sleek and shiny and they all seem very happy. Can’t bring myself to put them in a cage so they still have the free run of the house. I clean up after them every two days. I keep their trails very clean and sterilize their dishes every other day. They are clean and consistent about where they potty, which is good.

I think they’re starting to feel quite comfortable with me and strange as it may sound, I also believer we are endeavoring to respect each other’s “boundaries” house wise. They seem to know what is “mine” and what is important to me for them not to “get on.” I know what is theirs and do not disturb it except to clean/disinfect.

I didn’t know that mice only lived one to two years. I was hoping maybe five or six. They’re such sweet little creatures and so innocent and lively! 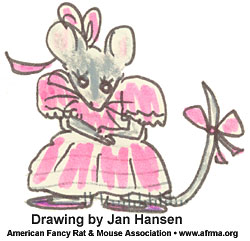 I have one I call “Rattie Jaws.” Let me share with you why. I had been putting their peanut butter in the plastic lid of a Tupperware dish for almost a year now. Ever since Rattie Jaws came, she would pick the whole lid up in her jaws and jerks it under the wastebasket! I would pull it out, and she would drag it back—and on and on that way.

Well, about three nights ago I scolded her and said: “Rattie Jaws, you leave this dish here!” Rattie Jaws not only took off with everyone’s peanut butter dish lid, she hid it and it’s nowhere to be found!

Now I feed “the herd” on a large, cast iron low-edged skillet. Something Rattie could never snatch! Ha! Now they all love the skillet even better than the lid because they can kick back and sit on the edge of it like old men eating a hot-dog on a park bench.

It would take me hours to relate all of the darling and hilarious occurrences that have happened because of the mice! I wouldn’t give them up for anything, and my motto today is: “Like ME, Like My MICE!” My convict friend has had his pet mouse for some time (its name is Earl Jr.) and he puts bread out for the other mice in the area faithfully every night. He has several “good customers” as he tells it!