This article is from the WSSF 2009 AFRMA Rat & Mouse Tales news-magazine. 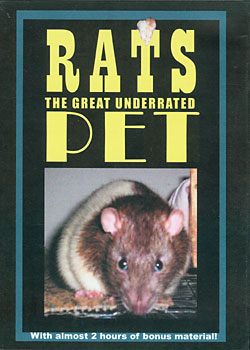 Iwas excited by the title of this DVD, Rats: The Great Underrated Pet, and the first 45 seconds were pretty good, but after that it went downhill faster than my rat can eat a yogurt drop. Filth, oh the filth!! Except for a few interviews, the rats being filmed lived in filth. It wasn’t like the end of the week on cage cleaning day, the floors where the rats free ranged looked like the bottoms of the rat cages. Squished food on the carpet and everything made of cloth was shredded (furniture, people bedding, etc.). He used electrical cords as toys to play with the rats—DUH! This wannabe Martin Scorsese claims he was asked to do a documentary for television, but two hours into shooting, the project was terminated. Could it have been the filth? Added to several rats in very poor condition, the poor camera work, more than a few boring interviews, annoying synthesized music, a not so hidden agenda, two very disturbing rescue stories, and an occasional big, hairy arm playing with babies, this DVD would discourage anyone from an adventure into the magical realm of rats as well as making those of us who experience the joys of whisker tickles, look like troglodytes! There was one cute extra—three minutes of a 1938 rat circus. Writer, producer, director (?), Dan Wedeking had a great opportunity to bolster the reputation of our furry friends, but if viewed by those on the fence, will do the exact opposite. He fell painfully short of his goal (I really think his goal was $$). One consolation is that rats have so tangled themselves in our hearts, this 70 minute l-o-n-g nightmare will be seen by so few people it will have no impact on the rat’s already great rap! Save your $13.99 (plus $3.50 shipping & handling) to buy your rats a new hammock and some treats!