This article is from the WSSF 2015 AFRMA Rat & Mouse Tales news-magazine. 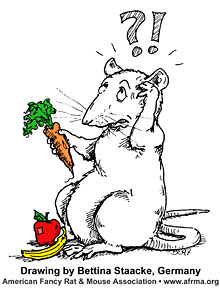 Did You Know?  Carrots reduce cancer risk in rats. Carrots contain a natural pesticide falcarinol which protects carrots from fungal diseases during storage and appears to lower the risk of rats developing cancer.

A team at the university of Newcastle upon Tyne carried out tests on 24 rats with pre-cancerous colon tumours. They were divided into three groups of eight. One group was given carrots with their ordinary feed, the second had their feed supplemented with falcarinol, and the third control group was just given ordinary feed.

After 18 weeks, the rats which had eaten carrots and the falcarinol supplement had been one-third less likely to develop full scale tumours than the control group.

Falcarinol is toxic in very large quantities but it has been estimated that a human would have to eat 400 kg at once to obtain a lethal dose, so we can safely be quite generous when giving carrots to our rats.

The paper was published in the Journal of Agricultural and Food Chemistry, 2005 53 (5), pp 1823–1827, Inhibitory effects of feeding with carrots or (-)-falcarinol on development of azoxymethane-induced preneoplastic lesions in the rat colon by Morten Kobaek-Larsen, Lars P Christensen, Werner Vach, Jelmera Ritskes-Holtinga, and Kirsten Brandt.