For most people, the holidays mean wanted and unwanted visits from relatives. For me, the visitors seem to be of the critter variety. One year we were visited by a Rosy Boa, another year a handsome specimen of black rat. The Rosy Boa we kept for 5 years until he died recently. The rat Larry caught and turned loose in a park a few miles away. This year, our holiday visitor was a tiny house mouse.

Towards the end of November, I noticed the telltale signs of mouse on the kitchen counter. Then I noticed droppings on top of my mouse cages. Hoping I had an escapee, I did a head count. Everyone was present and accounted for. I would catch glimpses of him in the kitchen running behind the refrigerator, then he would be on top of the mouse cages. In the evenings he would get bold and just sit on top of the cages while Larry and I worked on the computer. I was not too excited about this. Words like Hantavirus, lice, mites and whatever else he could be carrying filtered through my brain. I set a humane trap in the kitchen and one in between one of the mouse cages, hoping to catch him. Several times they were sprung, but were empty. Then on one occasion I noticed the trap was closed. I picked it up and shook it a little, it felt empty. Assuming he had just sprung it again, I opened it and out he flew. I didn’t realize mice could fly, but he jumped a good 3 feet in the air, landed on the shelving unit and disappeared. I knew he was too smart to get in one of those traps again.

In the middle of December I broke my wrist and stayed home from work for a couple of days. Unable to do anything else I got caught up reading my Sheltie List on the computer Meanwhile, the mouse snoozed on top of the Chocolate girls’ tank, curled up and content with the world. I could get right up to him on the cage as long as I didn’t try to grab him. Larry and I were scheduled to be off from work at Christmas, so I figured I would deal with him then. In the meantime, he spent the next few weeks keeping us company while we worked on the computer, having a grand time marking all the mouse cages and giving the rodent/computer room a nice mousey smell. The English mice seemed to enjoy their wild visitor. I monitored their health—no signs of creepy crawlies or sneezing. I resisted the temptation to leave lab blocks out for him. I wouldn’t have been surprised if my English mice, in a show of proper British hospitality, weren’t somehow getting food to him.

One morning while making coffee, I saw the mouse drinking water out of the kitchen sink drain stopper. He watched me, I watched him, and he didn’t seem the least concerned by my presence. I half expected him to wave or something. He finally darted across the counter, up the water cooler, and made another leap up to the top of the refrigerator where my cockatiel’s cage is. There, I assume he had his breakfast of spilled bird food. I made arrangements with Karen to borrow her humane mouse traps which are bigger than mine. Until I got them, I would just enjoy his antics. For a few days after Christmas I didn’t see him. I hoped he had moved on to greener pastures. The Monday between Christmas and New Year’s he reappeared. I guess he just “went away for the weekend.” On New Year’s Eve everyone got yogurt drops, and I even left a few on top of one of the cages for him. This was getting nuts. Now I was feeding him.

I went back to work the day after New Year’s. I walked in the door and one of my co-workers said that they had caught a mouse in the lunch room. Still being mentally at home I thought, “Oh no! My mouse!” I kept my mouth shut and didn’t say anything about having a look-alike living in my spare bedroom. As it is, they don’t know about my collection of rats, mice, and the most recent addition of dwarf hamsters.

The night before our rat judging training session at Karen’s I was getting ready for bed. I noticed the carrier 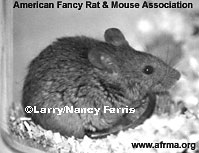 I use to put mice in when I’m cleaning, up on one of the shelves with the door open. I questioned Larry, and he proudly said he was going to catch the mouse. He said the mouse would go into the open door of the carrier, and he would close the door. Always the skeptic, I said, “Yeah, right.” and went to bed. About 2 A.M. Larry came into the bedroom and said, “I caught Curious George!” His idea had worked. The mouse looked half the size in the carrier. We agreed to take him out and let him go after we took a few pictures of him. Getting a close look at him I was amazed at how much he looked like the Beatrix Potter mouse illustrations. Unfortunately, the weather turned rainy and cold and the mouse’s release kept getting put off. I kept promising him we would turn him loose. He settled down, and didn’t seem the least bit afraid of me. I checked him over—he appeared healthy, no signs of parasites, scabs or respiratory. I fed him lab blocks, peanut butter dog biscuits, and any other treat I thought he would enjoy. I placed toilet paper and a toilet paper tube into the carrier. I hoped to make him comfortable and content while waiting for a good weather day to release him. I didn’t really feel right keeping a wild animal in a cage. We finally had a warm day—the day of our show. I was too tired when I got home to do anything with him. Larry was still making comments about keeping him. I was able to clean him out the next day when he ran and hid in his tube. I put a small carrier into his cage and quickly put the tube in and shut the lid. I tried to think of a way I could Ivomec him, but didn’t dare.

That night I think the mouse decided to take matters into his own hands regarding his release. I woke up Monday morning to a tiny hole in the lip of the carrier lid. He had escaped. While standing by the sink he raced right by me. I told him he was an ingrate. He has moved back into the spare bedroom again, happily marking all over the tops of the mouse cages. I hate to admit it, but he is much more fascinating to watch being free. He won’t go near the rat cages. As soon as I can get a hold of Karen’s traps . . . This guy has worn out his holiday welcome.

The night before the AFRMA Board meeting, I e-mailed Karen to remind her to bring the mouse trap. The mouse was doing his thing, visiting his English friends, jumping from cage lid to cage lid. I had just changed a couple of water bottles and sat back down at the computer. I heard a scuffle break out in one of the cages. He had managed to get into a cage that had a pair of Pink-Eyed Whites that I had just put together the night before. The male, of course, was beating the heck out of him. I saw opportunity knocking. I didn’t want the mouse in the cage any longer because someone (my P.E. Whites) was going to get injured. I picked the tank up, took it out to the front yard and opened the lid under a juniper bush. He jumped out and I hoped that would be the end of him.

The next morning, there he was on top of the cages again. I was sure I was seeing things. I got up close thinking this was possibly a female—his mate. It was the same mouse, properly “equipped.” I kicked myself for not putting the tank in the car and driving to the park.

I got the trap from Karen and spent the next week baiting and checking it. On Saturday evening, I took the mice out of a cage he was spending the most time on. Larry had the idea of tricking him into getting into the cage. I was sure he was somewhere watching me take the mice out. We waited, worked on the computer, and watched. Nothing.

I put the mice back in their cage, and Larry set the trap on top of the cage. The mouse finally went into the trap. Larry got him into a carrier, and he was hopping mad. We drove him to a park two miles away and turned him loose. He didn’t get to stay for Valentine’s Day.